Teaming up with The Overthrow for WMC 2k10, Anthony Nicholas and I hit Downtown Miami for 4 dope parties.  The Bang Bang party, Annie Mac, Temple of Boom & the Hard to Leave party, were all a tremendous success.  We found ourselves bouncing back and forth from Bar & White Room capturing interviews from A list Electro DJ's.  One of the DJ's we caught up with was Drop the Lime. 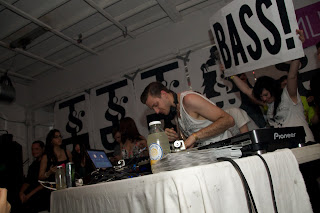 Luca aka Drop the Lime is an electronic DJ/Producer, born in NYC.  He runs the dance label Trouble and Bass.  He is an innovative DJ that is known for infusing live vocals layered over original tracks.  Luca's style was an electronic odyssey of a house sound accompanied by ghettotech, dancehall, northern soul, doo wop, dubstep, and most definitely crunk! 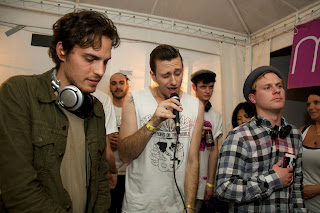 Luca jumped on the "wheels of steel" with no introduction needed.  The crowd roared, and pumped their fists in the air ferociously. I immediately snagged some photos as the astonishing performance captivated the crowd in a melodic trance.  Drop the Lime's build ups & breakdowns were 100% mapped on count.  What really amazed me, was of course when this manic displayed his passion for the mic. To make things even better....Luca sang on the compositions that were of his own production! 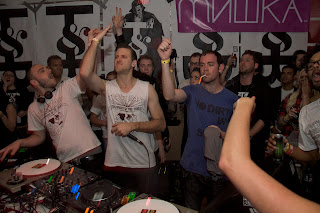 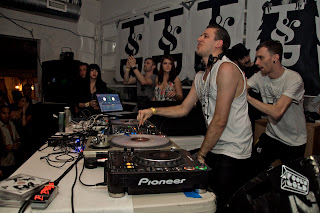 My geeky pal Anthony Nicholas interviewed him earlier that week, and decided to ask for personal advice rather than traditional interview questions.  When I fist met DTL, I never imagined for him to "murk it" as hard as he did at The Overthrow's Temple of Boom Party!  He is by far one of the best Electronic DJ's I have ever heard spin.  "There wasn't too many wobbles", I told myself.  Some melody's had a tropical feel, with spine tingling chord progressions. Oh yea...don't forget the BASS!
Drop The Lime Advice from Nick Flash on Vimeo.

Check out the full Temple of Boom photo gallery
Article by: Murkem
Photography by: Murkem
Posted by In The Cut at 5:54 PM