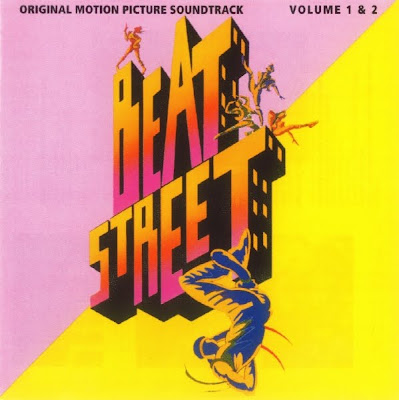 Beat street.... All I can say is wow. A slightly dated but nonetheless fascinating snapshot of musical history. Beat Street is an urban musical detailing the roots of hip-hop. Set in early-1980s New York, the film focuses on the lives of a small group of young people setting their experiences against the larger backdrop of the city's burgeoning music scene. The story of up-and-coming DJ Kenny (Guy Davis) and his relationship with jazz musician Tracy (Rae Dawn Chong) may only be a device, but it's surprisingly effective, as is the ultimately tragic tale of graffiti artist Ramon (Jon Chardiet). The movie's real showcases the sounds of the street, so it's full of some of hip-hop's most influential names--Melle Mel, Doug E Fresh, Kool Moe Dee, the Rocksteady Crew, Jazzy Jeff, and Arthur Baker. And while the combination of electro and rapping may sound a little crude to modern ears, there can be no doubt that Beat Street is the sight and sound of history being made.Todays hip hop lacks almost every important element of what real hip hop is. This movie back-spun me to a time when hip hop was dope and larger than life. Hip hop is all about the lifestyle of Graffiti Writers, Break-Dancers, DJ's,MC's, and Beat Boxers. This oldie but goodie had me grooving, and shaking it all over my living room. Hip hop today is truly brain washing our youth, and it's only a matter of time before history comes around and repeats itself. I can't wait!