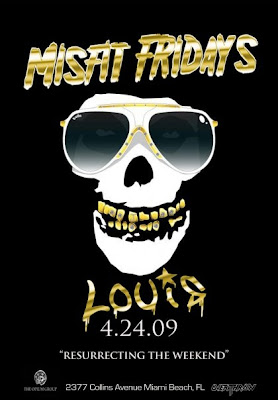 Attention Misfits! The Overthrow crew {Sam Baum & Alexis Mincola} are at it again! This time they are unleashing their fury of Rad upon Friday Nights. It is now apparent that your weekends will NEVER be the same.

As a dj & nightlife enthusiast, I am constantly searching for something new and innovative, but it seems that innovation is few and far between. Ever since I met Lex, {Alexis Mincola} I knew that this guy's twisted mind was eventually gonna set off a chain reaction of rad that would eventually span the entire country. When I heard about "Misfit Fridays" I must say, I was a bit mystified. I wanted to be a part of it from the moment I saw the flier.

One can only guess what kind of madness that the overthrow crew has in store for you each & every week, but please know that it will push the limits of what our imagination can even fathom. Sex, Mayhem, Debauchery, Booze , & Disco Magic will fill the air inside the grandiose venue of LOUIS.

The fashion and overall look of this party is sure to be something spectacular as well because it is getting a helping hand by the very talented artist Aban Sonia. Sonia's avant-garde eye for style is unlike any I have ever seen and will infuse this party with a certain level of panache that south beach has yet to experience.

Dj Damaged Goods, Aka Obi Tawil will be djing the opening night of Misfit Fridays and will be providing the soundtrack of madness for you to shake your ass to.

As a dj myself, I am quite a Misfit. My unconventional style of mixing always keeps crowds rocking till the early morning. I love coming up with songs that set a vibe unlike any has felt inside a discotheque.

After hearing about this party, I created a playlist of about 1000 songs that I would mix if I was behind the decks of "Misfit Friday"
I will be making mixtapes called "Misfit Mixes" throughout the weeks in an attempt to get Lex to let me play there one night.

Here is a list of about 25 songs you might catch in my upcoming mixtapes in no particular order.
{All of the songs I play and collect by the way are all in .WAV or .MP3 and between 160- 320kps}

Check out the Commercial for this party!!